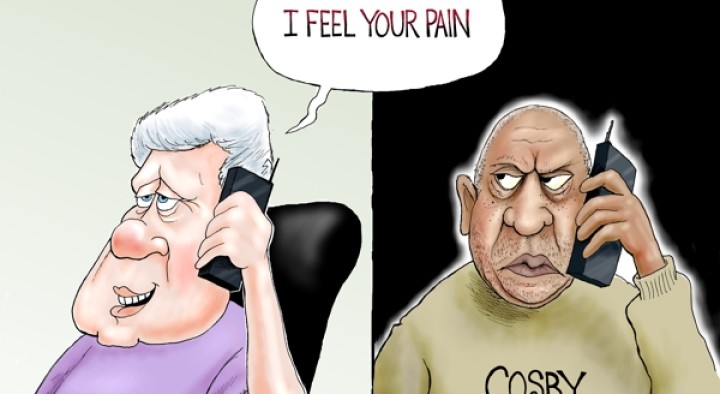 I seemed to hit a nerve earlier today when I asked a very innocent question:

Dear Media,
Good Job on Cosby takedown.
Now…
What EXACTLY did he do differently than President Clinton?
Thanks, I’ll just hang up and listen!
~KMC

Since my career began during the midst of the Clinton sexual turmoil I’m a bit more versed in the history of the former President than were some of my reactionary blog trolls who immediately sputtered, “but but but but but…”

The social media argument boiled down to “Cosby drugged women and forced himself upon them” vs. “Clinton was merely inappropriate–you know dropping his pants for Paula Jones.”

Sadly that wasn’t the difference.

Cosby appears to have used drugs… yes. Though ironically of the 52 cases he’s been accused of, none of them brought criminal charges during the statute of limitations. (And the charges brought today run out tomorrow, though they were looked at by a previous District Attorney and thrown out.)

But let’s argue that the accusers have merit. That in the midst of otherwise consensual sexual conduct Cosby wanted to go further, slipped some roofies into drinks, and took advantage. Convict the man, and send him away.

But let’s hold the same standard to the former President who didn’t drug his girls but physically forced them down while (in two cases) biting their lip and face hard enough to bleed. The bite hold also held them in place long enough that they wouldn’t struggle because of further tearing that might have been done to the facial tissue. Following these interludes leaving them with parting shots like, “you better get a doctor to look at that.”

One of them described it this way:

Then he tries to kiss me again. And the second time he tries to kiss me he starts biting my lip … He starts to, um, bite on my top lip and I tried to pull away from him. And then he forces me down on the bed. And I just was very frightened, and I tried to get away from him and I told him ‘No,’ that I didn’t want this to happen but he wouldn’t listen to me. … It was a real panicky, panicky situation. I was even to the point where I was getting very noisy, you know, yelling to ‘Please stop.’ And that’s when he pressed down on my right shoulder and he would bite my lip. … When everything was over with, he got up and straightened himself, and I was crying at the moment and he walks to the door, and calmly puts on his sunglasses. And before he goes out the door he says ‘You better get some ice on that.’ And he turned and went out the door.”

Cosby wins the numbers game at 52 accusers, but Clinton was no boy-scout at 19.

Clinton fans who have always overlooked his predatory tendencies dismiss this entire comparison, but Cosby is at least admitting that the interludes began in consensual fashion.

Almost none of Clinton’s accusers ever did.

Cosby might go to prison as a 70 year old who lasted within one day of waiting out the final statute of limitations.

Clinton will likely go to his grave a free man, biting his lower lip… reminding himself of when he often bit others’ as well.

Comment via FacebookComment via Disqus
The *NEW* Islamic Guidelines On Slave-Sex
VIDEO: Bush & Carson What’s Next?