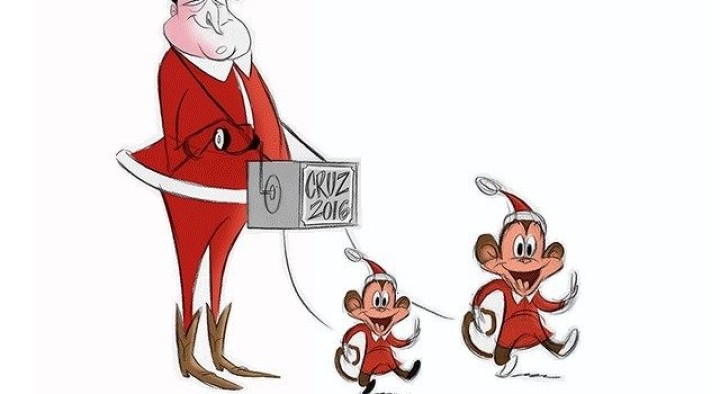 Do I even HAVE to actually ask it?

The progressive, tolerant, no-hate/all-love, do what is only good to people, feeling’s are what should guide us left in America has suddenly swallowed its’ collective Adam’s apple.

If for even half a second an elected leader of Latino/Caribbean/African origin were to have his/her daughter portrayed in ANY form of media coverage as a less-than-human ape, the #BlackLivesMatters clowns would be looting every Wal-Mart and Walgreens within half a mile of wherever they found themselves. (As long as that elected leader were brainwashed by the right people…)

Imagine an elected leader–like–President Obama–with two innocent daughters (who most likely despise everything political like their mom) were to suddenly be caricatured as chimps, knuckle-dragging their way to school. Imagine the sheer hell that would be unleashed on every street corner.

Let me cut to the chase.

It is never appropriate to refer to any elected leader’s daughters (particularly very young ones) as animals, of any sort. To do so is to imply their lack of full humanity–and I’m pretty sure we fought a war that was necessary to restore that principle to the totality of our nation.

The cartoonist who pulled this off as an attack against the sitting honorable Senator from Texas–Ted Cruz–did so because she believed her liberal editorial staff at the Washington Post would back her political ideas, than care about her treatment of human beings.

From candidates talking about his possible future female opponent getting “schlonged,” to talk radio professionals saying female candidates went “full vagina,” to the same said candidate casually referring to female television anchors menstruating out of their “whatevers,” to editorial cartoonists now going racist/hater on the leading Latino candidate’s children, the level of “dignity”  in the race this year has been piggish. (Full disclosure: some have apologized for these actions.)

There are many excuses made for the behavior, and those exhibiting it.

But none of them are valid.

We have a fight to wage for the future of the free world. We have a commander-in-chief who is out-to-lunch. We have an economy that has yet to experience what feels like a recovery. We have some enemies who wish to blow us up on our soil, and some who would like to behead us on theirs. We have just given the world’s number one terror state $150 Billion dollars, and had our Secretary of State promise them that we won’t hold them to the same visa standards for visiting our soil. We watched as our French brothers and sisters were slaughtered because of lax systems within the system of refugees coming to their nation. We understand that we are vulnerable to the same threat here. We mourned with the families of San Bernadino.

We are spooked at things that look out of place, and a President who has the gall to say on NPR that he never realized Americans were so worried about terrorism here because “he doesn’t watch that much cable news.”

When we go full genital in our lame attempt at humor(because we are awful on facts and have zero ability to evidently prep our speeches before we give them.) When we attack a female challenger to our favored candidate by reducing her impeccable life of accomplishment to her birth canal. When we reduce the children of a candidate we dislike to one of the oldest racial stereotypes in history…

We give people lots of incentives to vote–for all the wrong reasons.

Thus we avoid talking about everything I just mentioned five paragraphs ago.

If you are a person who loves the country. If you dislike the path we are on. If you want to see a different nation rise… Then for the love of all that’s holy–STOP!

Time is running out, and the next attack looms, and the forces of evil are on the march.