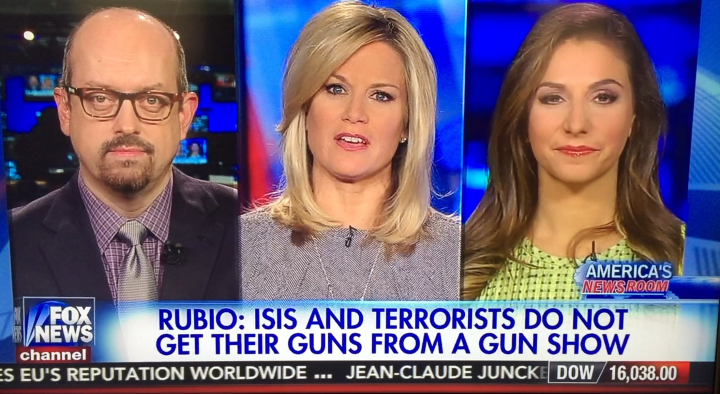 The arguments in the on-going debate over guns and having them in the hands of private citizens is easy to win on the merits. What is more difficult is dealing with the tactics of how the discussion is carried out, and what happens when you begin to dismantle the arguments with pure rational thought.

In the clip you see Emily Tisch Sussman playing the same cards so many have before her.

The problem is that almost zero of them hold any truth. There aren’t 30,000 gun murders a year, its closer to 11,000 (which in a nation of 370,000,000 people is statistically invisible at .00002%. She effectively moves the goal posts in the conversation so that after each observation she gives is dismantled, there is a different one to focus on.

She claimed that the South Carolina shooting was evidence of the need for more executive action from President Obama–which would be unnecessary completely had only one person in the Bible study been armed.

She claimed that law-abiding gun owners are more likely to have those guns wind up in the hands of people that do bad things with them. Really? With 300,000,000 legally owned fire-arms in the nation, how is there anywhere near that many nefarious acts being carried out?

She claimed that the Fort Hood shooting demonstrated why “guns didn’t stop” a mass shooting. But she ignored or forgot that Armed Services personnel aren’t allowed to carry their sidearms on Ft. Hood premises.

Lastly and unbelievably she made the argument that the victims of mass shootings themselves would in some way NOT WISH to have someone to be armed and to shoot back in the midst of one of these killing sprees.

Sadly she notes that one victim from the Virginia Tech shooting incident has stated that he would not have had the clarity to know who the shooter was or how to take him down.

My contention is that if we are going to take a survey of the victims of mass shootings and their feelings on private gun ownership–let’s begin with interviewing everyone who has died at the hands of these merciless killers–with no lawful means of defending themselves.

Of all the arguments the left proffers on taking away guns (under the guise of stopping gun violence) there is not a single one of them that has merit.

Which is why we must not let those making the arguments and moving the goalposts get away with such rigorous intellectual dishonesty.

Comment via FacebookComment via Disqus
Why did we have to apologize?
Bedtime Masterpiece Classics: This Is Not My Hat!