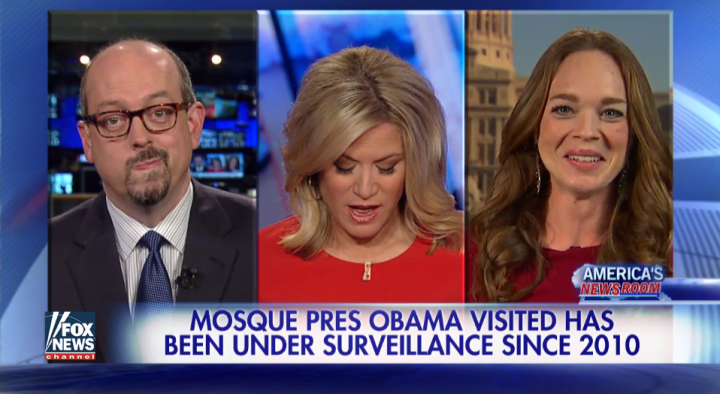 I was somewhat confidant that when I walked out of the studios at FoxNews this morning it had the possibility of being… For good.

The segment we were scheduled to discuss had to do with what the President has been droning on about this week.

In an odd and sudden push to become a “champion” of this mysterious thing called “religious liberty” the President yesterday spoke to Muslims about how Americans have been “mean” to them, and today at the National Prayer Breakfast he spoke to Christians and chided them to stop being “mean” to Muslims.

We–myself and the adorable Marjorie Clifton–were asked to comment on the significance of the President visiting the Islamic Society of Baltimore. A Mosque who had such terror connected ties in its past that the FBI has kept it under surveillance and a past cleric had been active in the raising of money for terror groups and he himself had ties directly to the Muslim Brotherhood.

But my argument is simple.

Faiths can’t ever become what President Obama wants them to become because they are not what he believes they are, and they have no interest in changing to become what he wishes.

Militant Islam spits on President Obama and sees him as a “useful idiot” in the accomplishing of their caliphate or fatwa.

The Muslims he cites constantly as peaceful are what the more strict clerics in Islam would call “backsliders.”

The Christians he wishes would exist would not believe in the exclusive claims of Christ.

The road he wishes we ALL would take leads to an eternity of peace and well wishes, that to be candid we all wish existed, but to be truthful we all know doesn’t.

Not all faiths are the same. They are not even equal in the morality of their merits, and we would be foolish to believe that we can will it to be.

My radio audience got a big fat dose of this today as well:
Comment via FacebookComment via Disqus
Psalm 41:12
Psalm 42:8