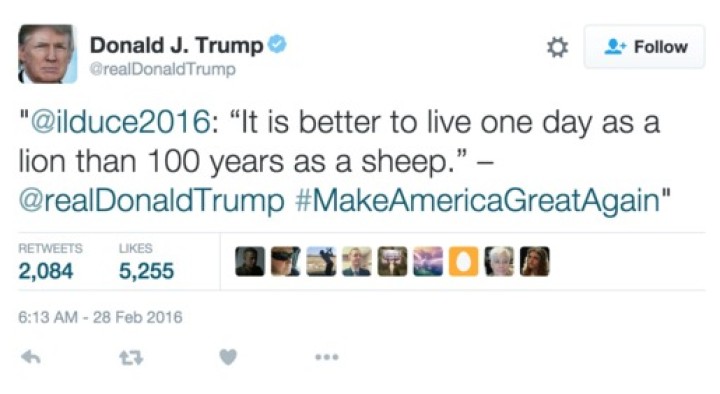 It would make it easier for a person of principle to support him if he didn’t do such ridiculously silly things.

Is Donald Trump a fascist?

To be fair, it might just depend on the day of the week that you ask. But over this weekend, he sure sounded more and more like one. 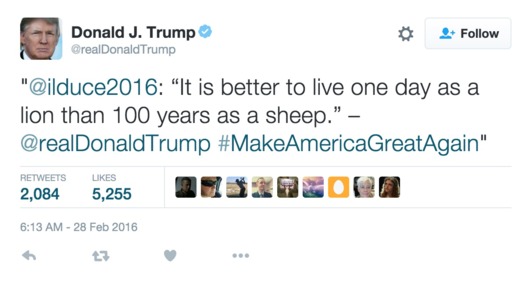 Quoting a famous fascist–WHOSE VERY MONIKER INDICATES THE SOURCE–is probably not a helpful thing if you are attempting to be rid of any comparisons.

Like you might not be clinically insane, but avoiding the chance to run through New York traffic naked–especially when no one was pushing you to do so–could be advantageous in refuting people who say you are.

But the stupid retweet aside, fascism has a very specific component to it that in fact is far more sinister, and it was this specific component of fascist despotism that again–for no explainable reason–Donald J. Trump decided to just “put out there.”

But who cares… right? Be your own man…

Your own, vile, disgusting man…

What did he do?

“I’m going to open up our libel laws so when they write purposely negative and horrible and false articles we can sue them and win lots of money.’’

Notice that he did not restrict the articles that Dr. Lawsuit would open up the libel laws to allow for.

Not just as the law works now–stories that are known to be false, and spread with the intent to injure an innocent victim.

Nope, he wants to peel back those protections so that anyone he disagrees with can be slapped with a big fat lawsuit and effectively silence anyone who disagrees.

The America that we are on the cliff of losing for a replacement of Donald’s #EffYeaMerica has enjoyed the ability for a press to be hostile. In fact it should be their job. To search always for the truth of a story regardless of the people it makes uncomfortable.

Trump has spent his entire life in board rooms where no one challenges him. Hence when he is challenged on a debate stage he literally loses every ounce of composure he walked in with.

He talks about everyone else being “nasty guys” but he was the one who compared Dr. Carson to pathological child molesters, calling Ted Cruz a liar–while never providing proof of any dishonesty, and now pokes fun at Marco Rubio for his ear size, sweat glands, and use of make-up.

One can only assume if a journalism outfit did some unfavorable things–like say found in his still secretive tax returns that he had in fact given money to Planned Parenthood within the last year, and reported it–that said journalism outfit would likely be sued.

Because again–read the criteria, that he will use, to sue opposition press–negative, horrible, and false.

No one in the universe–even his rabid supporters agree–believe he has the temperament to handle the daily negative stories that will be written starting yesterday about his administration. But in Trump’s world, being the boss of the boardroom, you don’t have to put up with stuff that contradicts you–especially on fact.

Instead you must eliminate the voices that seek to merely hold you accountable.

Is there slime in today’s press? Absolutely. And thinking people can see and judge it for what it is.

If people willfully use knowingly false info and attempt to injure an innocent party the law allows to be punished.

But Donald Trump–given his level of wealth, visibility, and notoriety–is not picked on any worse than any other Republican Presidential candidate in my lifetime.

The difference is he has a far thinner skin. So instead of answering his critics. He’d just rather they be shut up via the force of law.

Big Tough Guy that one is…