On the night that Donald Trump won New Hampshire the most important poll that could be taken was one he flatly denies exists.

Trump, “We don’t do internal polling.”

He does and has and will.

But on election night in New Hampshire he was at a whopping 44% in the internal Trump polls.

As of Tuesday of this week sources tell me that number was 28% and had not yet bottomed out.

Now the public polls–which have curiously the same problem in South Carolina that they had in Iowa–were all lagging behind the internals at Team Trump.

But they did show something fairly amazing.

Until this morning when the Wall Street Journal/NBC for the second day in a row revealed a polling out come that documented the Trump free fall. And their number on their most up-to-date South Carolina poll?

The number that the Trump forces knew about three days before.

Students of political science learn early on in watching elections that the polls may or may not get it right. A lot depends on how they are set up, targeted, modeled and understood.

In Iowa the polls consistently predicted larger than conceivable turnouts. They projected 200-300,000 caucus goers. The previous all time record was somewhere in the 130,000 area, and while Iowa turned out massive turnout, the final number was near 160,000. They also under polled evangelicals. Considerably. So Iowa turned out to be a surprise.

In South Carolina the polls are predicting larger than conceivable turnout models 1.4-2.2 million in some of them. I believe 700,000 would set a new record. They are also again vastly under counting evangelical turnout. By maybe as much as 11%.

This is why students of politics shouldn’t be paying attention to final percentages in final polls but rather that should be measuring momentum.

Trump forces don’t want to hear this. But Donald has been in free fall since New Hampshire. His erratic self-damning temper tantrum at the South Carolina debate where he espoused Code Pink, re-embraced Planned Parenthood, and attacked President Bush for attacking Iraq in 2003, when he himself had voiced support for the invasion in September of 2002 all exposed an irrational inability to deal with cognitive dissonance (of being wrong). And this added to the free fall.

Trump’s self-inflicted wounds in South Carolina, much like his erratic behavior of skipping the Iowa debate and dissing the GOP voters, are about to unleash a repeat disappointment to the Trump supporters.

If you study the newest NBC & FOX polls–one conservative and one liberal news outlets (not really but that’s how the activists see them) there is a similar issue of momentum occurring for a candidate to the positive. 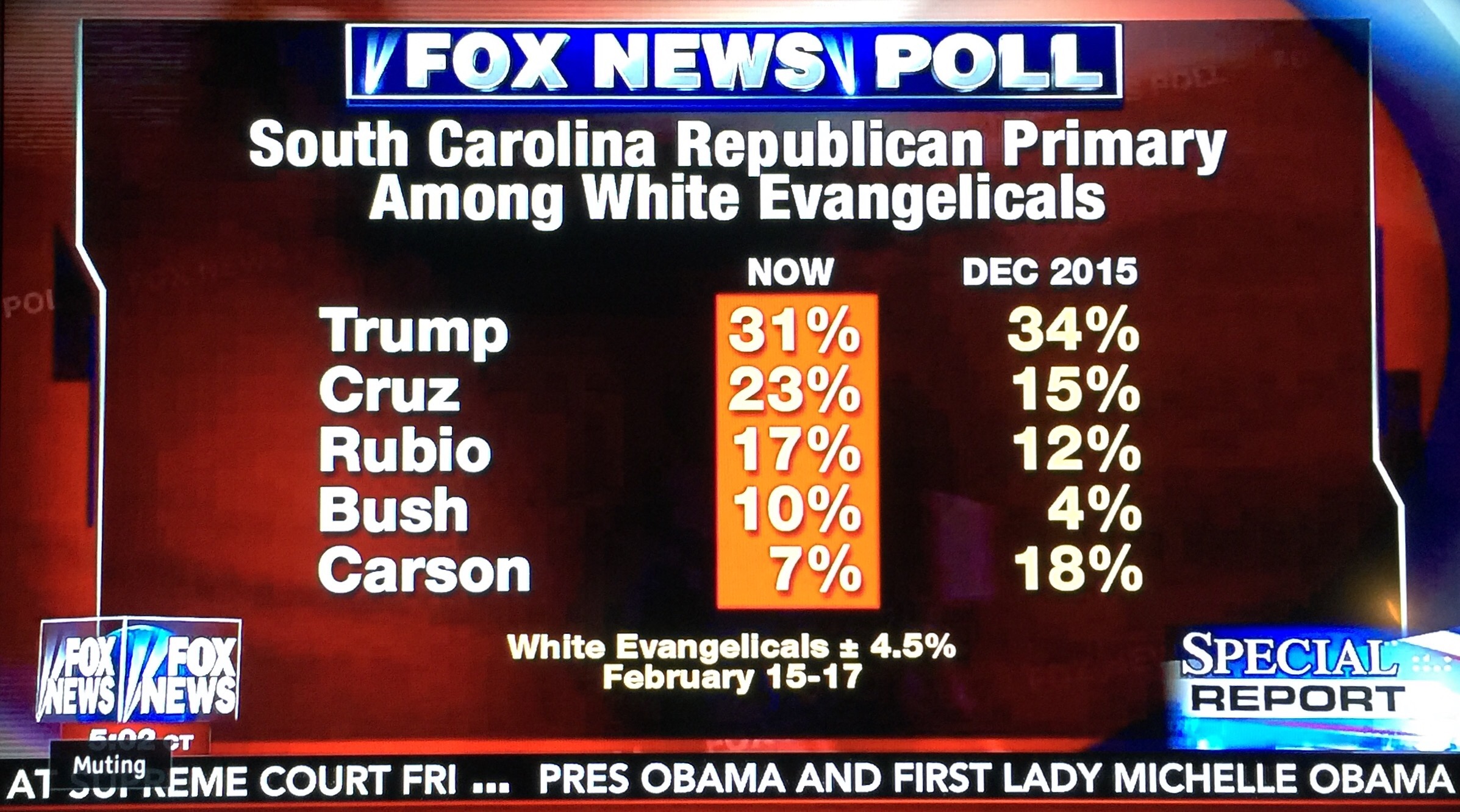 And it just so happens to be occurring in the most undercounted polling demographic: Evangelicals.

Note that since December Trump’s number has been flagging. But since he was the national polling front runner he should have been out front in December. Then Iowa and New Hampshire happened and he was riding a big victory into South Carolina.

But what has actually happened?

Now note not the number but the direction of Cruz’s numbers in the evangelical chart above.

Cruz’s momentum has more than twice the intensity in the most undercounted demographic as does the free fall of Trump.

And things fall easier than they climb.

Trump has seen his internals on this for a while. He of course will blame it on others.

But Saturday is going to be an unhappy night for him. Because even if he wins it will be closer than he ever imagined when he gave his victory speech in New Hampshire.

And I don’t think he is going to win. 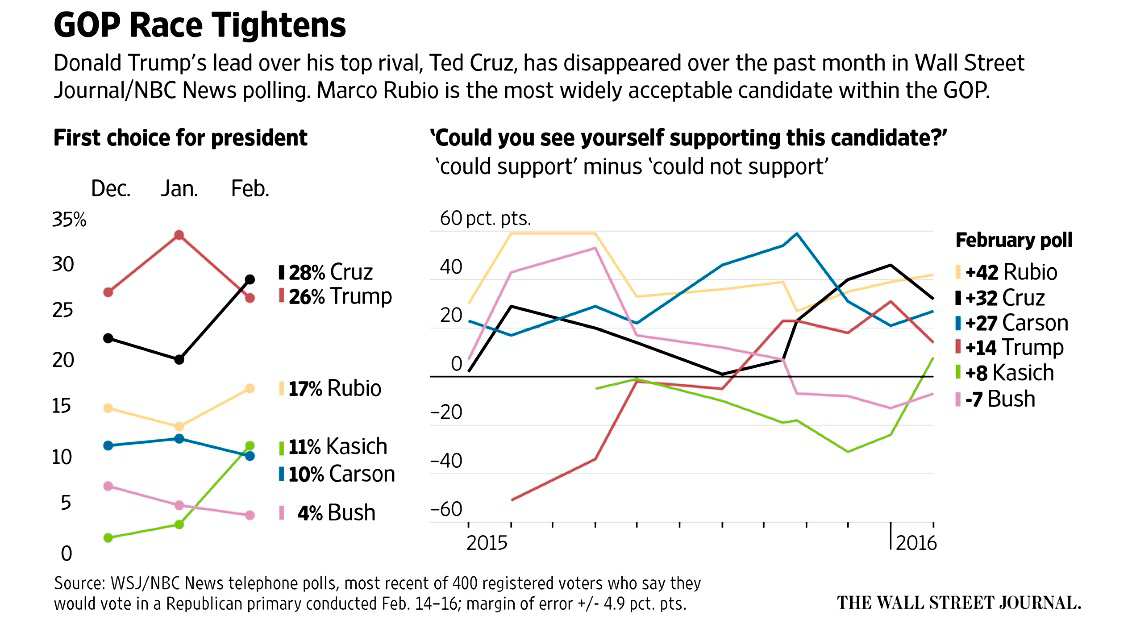 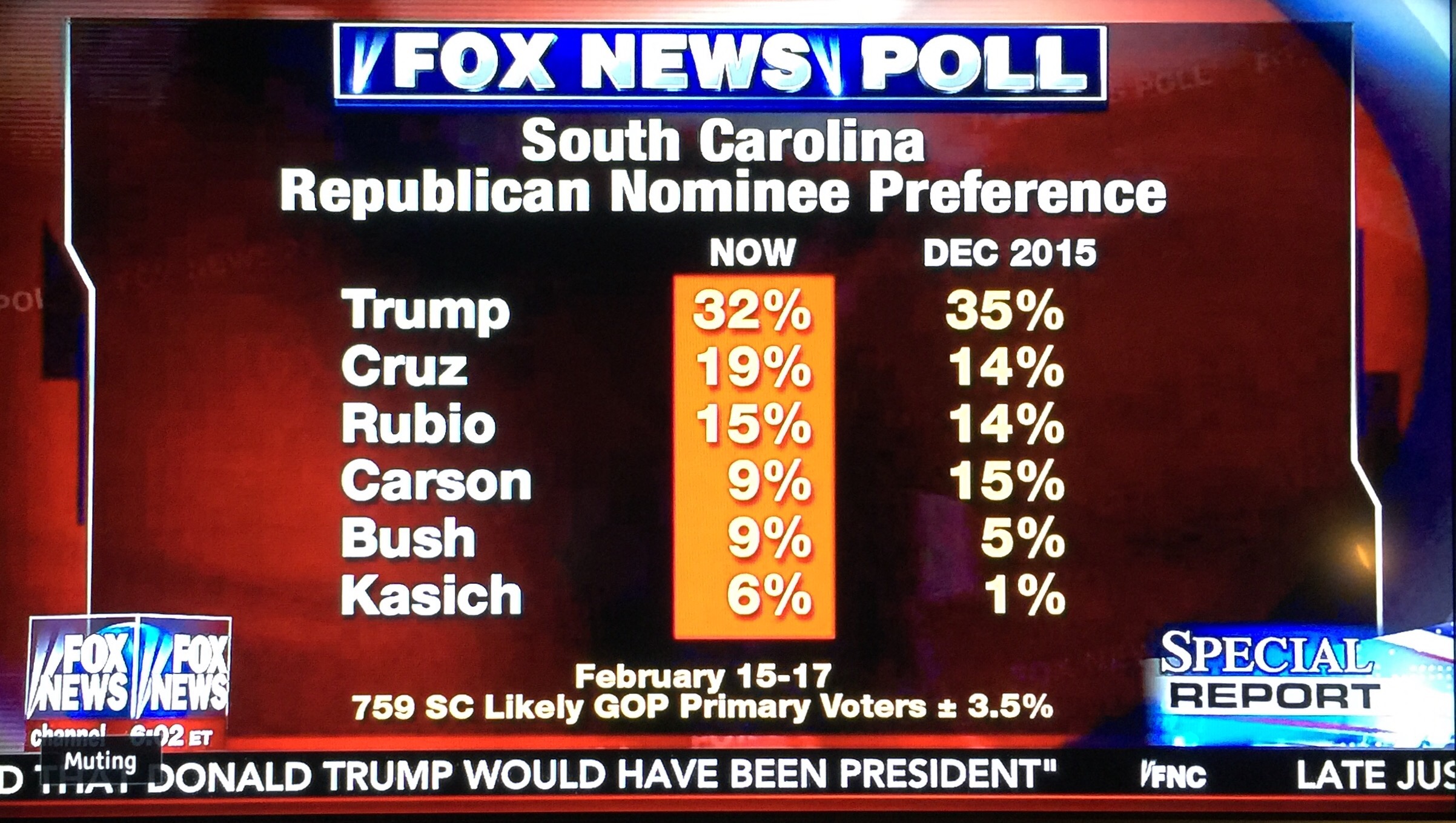