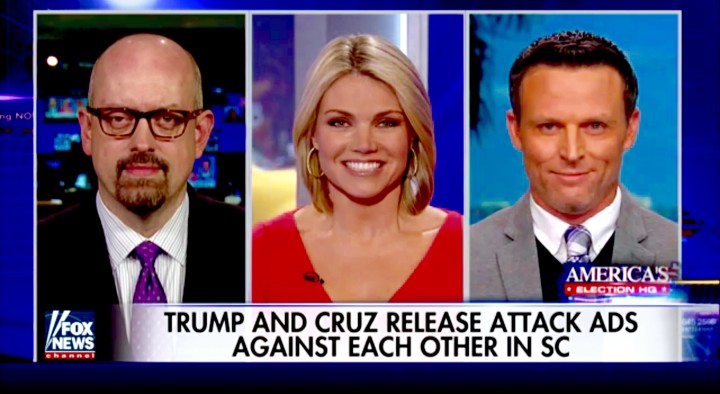 Many Trump-protectors (think pocket protectors with far more foul language) have been criticizing those who have attempted to be objective about the Presidential primary thus far as being those who favor “circular fire” within the GOP camp.

Perhaps it would be far more honest and somewhat fairly obvious to the watching world if we made mention that the biggest supplier of circular fire in the GOP primary to date has come from one Donald J. Trump.

The world’s most cravenly hungry abuser of eminent domain has set his gaze on every other Republican in the race with a desire to punish them and put them in their place.

He has lied, flip-flopped, and betrayed the sincere ugliness of his inner self in doing so.

His perverse desire to not just win the nomination but to seemingly injure every person who honestly cites his record has a sickness and pathology to it. A fellow republican brings up the fact that he himself has advocated for single-payer healthcare, and instead of refuting the observation, Trump makes public some oblique reference to the person’s childhood. (Remember that distasteful public display regarding Dr. Ben Carson and a belt buckle?)

It is ugly, and unwinsome.

Trump supporters justify staying “on his good side” for various reasons. Prominent former conservatives have sold their soul to sell their book on illegal immigration. Former tea-party champions do so to make a burst into the campaign trail. And other do so to perhaps secure an enormous donation for their university or mega-church.

Other supporters have read Trump’s newest book and come away with the impression that Trump is super man who will bend the known universe to his will. I understand this group of supporters because they want America to be strong and are tired of abject capitulation that the current White House exhibits without end.

One more strain of supporters I actually feel badly for. They have been completely co-opted by the most effective marketer to have ever run for President.

In Trump’s much-bragged-about Art Of The Deal he  not only details his often previously bragged about immoral bedding habits, but his strategy of how to close the hard to close deals.

A simple idea of which is – lob a starting point that you know you will never fulfill, but make it so big that the people you are competing against in the effort have no ability to counter. Once they’re back on their heels you can finally tell them what your real offer is.

This idea has played on people’s fears in the election of 2016. Trump has outright promised something he knows he will never deliver.

This tactic is the most sinister of the liberal Trump’s machinations. For it is exactly how liberal democrats campaign. They con the lowest low-information voters available. They get them all worked up. They make sweeping promises, with almost zero details, then when elected, they bait and switch for something else.

When you think about it, what do ANY of us actually know about Trump’s actual plans for once he’s in office? We’ve seen no specifics. “Winning again, and being great again,” is not a policy plan.

Last excuse that previously level-headed conservatives continue to say to me is, “Kevin we just have to win in 2016.”

They say this as though Trump is the only top tier GOP candidate who outpolls Hillary and Bernie.

The inverse is actually true. Cruz and Rubio both beat Hillary head to head and Trump is the one who loses to her.

So when GOP voters chide you for circular fire (for just honestly pointing out his desire to expand Obamacare to single-payer, or being Planned Parenthood’s “man” in 2015, or knowing he will not “build a wall” no matter how many times he claims to) remind them that he fires on more Republicans than the rest of the field combined. Because this isn’t about America this is about him.

When Trump supporters claim he’s anti-establishment, ask them how. Then remind them that he’s the most omni-establishment person to ever run. He’s paid off everybody, everywhere, just to get his way. Because this isn’t about America this is about him.

When Trump supporters promise you he’s going to forever and immediately stop illegal immigration by “building the wall and force Mexico to pay for it” simply ask them how he has demonstrated that he can do it. Ask them also if they’ve studied his negotiation tactics and why he regularly uses huge lies to dislocate the conversation. But he doesn’t have to tell the truth because this isn’t about America, this is about him.

When the low-information start making spittle fly in their inability to come up with one policy position they have any detail on, remember this isn’t about America, it’s about him.

And when you point out that he’s the second most disliked person in the race behind only Hillary herself don’t be surprised if they bring themselves to call you X-rated names for female genitalia (a theme on his campaign evidently.) Just keep in mind that it’s not about America, it’s about him.

And shouldn’t thoughtful people come to expect the same when he appoints Supreme Court judges, argues for economic policy, or asks the government for favor in some situation where he could benefit by getting a piece of property?

We are not at the stage of a general election where the options are limited. There are several principled candidates to choose from. And the entire purpose of a primary process is to vet the best choice possible.

Because the Presidency can not be about any single personality but must always be about what is best for America!

Comment via FacebookComment via Disqus
Psalm 52:9
America should be GOOD! Not “Great!”