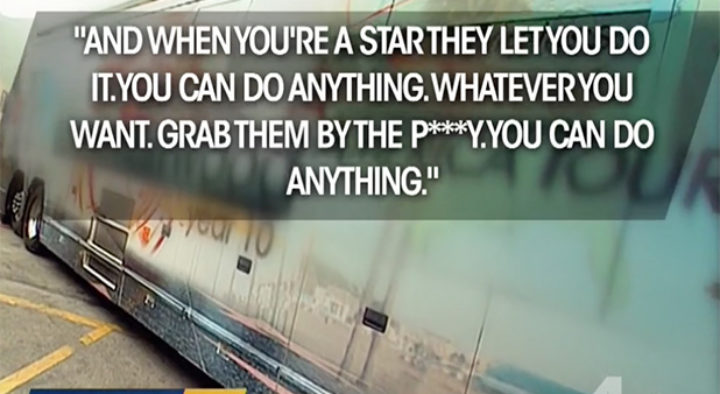 Like you my Friday evening social media feeds got clogged up with forwards and retweets of a certain someone holding court on an Access Hollywood bus talking to “the boys” about “hot girls” and using exceedingly vulgar references in the process.

Almost immediately I began to see reaction to the lewd and piggish behavior.

Conservatives who have been looking for a way to help Hillary Clinton win just to spite the Trump campaign seemed to have suddenly found a voice. Invoking a sudden demand for purity in their candidate, most of them weren’t out there working very hard when they could have rallied around Ted Cruz early on. Now their pious pronouncements of “how can you vote for this man” seemed to not take into consideration that in not doing so you are working actively to install his opponent whose husband actually raped women and molested interns with cigars.

Liberals who hate Trump began crowing about how immoral it is for someone to vote for him, forgetting that their candidate of choice has a husband who still gets women in their twenties delivered to his penthouse living quarters while she is nowhere near the premises. That she stood beside him knowing his worst deeds were on going, and even attacked the women who spoke out about the mistreatment. She also provided legal defense for a known rapist while laughing at her ability to help him get away with it.

To date we do know that when Trump authored his book he crowed long and loud about his exploits of romantic and sexual conquest. The tape (which included the voice of the cousin of Jeb and George W. Bush egging Trump on) does not seem to indicate as to whether the male member measuring that was being discussed was anything other than stupid 7th grade adolescence. We have no evidence that Trump has ever forced himself on any woman. If he has, it should be as resoundingly condemned and prosecuted as any man should be under the same circumstances. No one should be above the law.

So how does this impact the moral question of which binary option voters of good conscience can support?

Well that is a question that should be answered by each person’s conscience. That the incident was 11 years past, that there is no evidence that Trump has ever done the things he said to the chums on the bus, that he has openly admitted that he has said and done many things he regrets and believes are wrong, that he is seemingly happily married and dotes on his wife—these are all fair points to consider.

Also fair is asking the question as to moral clarity “is there a difference between the two options for president?”

Certainly neither are saints but the question matters regardless.

One supports defunding the tax payer responsibility for the Planned Parenthood murders of pre-born children. The other said that she promises to quadruple the amount of tax-payer dollars Planned Parenthood receives. Evidently sixty million dead pre-born children isn’t enough for her blood thirst, so she figures giving two-billion additional dollars per year will satiate her.

One believes that our military families should always be granted the basic courtesy of being told the truth as to the welfare of their kin as they serve. The other abandoned our boys, lied to their families then shrugged her shoulders at Congress and asked what difference it made.

One believes in recreating all of society unto her own worldview and moral code through the leveraging of the tax code and punishing the most successful. The other believes you should be guaranteed your right to keep what you earn, and to allow the representative process we have to write the laws and enforce legality.

One openly admits his worst failures. The other lies about hers at every turn.

No doubt the election trail of 2016 has been a humbling experience for Donald Trump and at times verging on humiliating for his wife and children. Being humbled and at times humiliated by our own failures is not a bad thing. In fact it has proven down through the ages to be a very useful motivation for changing one’s behavior and seeking greater sobriety out of life.

The shocker of this election season shouldn’t be that two sinners are running for office. All have sinned and fallen short of God’s standard.

The shocker is the rank dishonesty of his opponent, and the even stinkier rank hypocrisy of the electorate.

I don’t wish to be the moral nanny around the water cooler, but I have challenged men when a group have been ogling over a new staff member, or discussing someone’s “hot wife.” As men we need to be measured by much more than our appetites. And even a simple reminder that the women being discussed in such terms are made by God and in His image has often been a blow to my own conscience.

The shocker of this election cycle is that our two top candidates actually reflect with great accuracy the true moral state of the people of our nation.

They are the mirror of the people that elected them.

They are us, and we asked for them.

It would do us all good, to learn as much as can in this moment about our own hideous but hidden moral pitfalls and concentrate to the best of our ability to avoid them.

For if we want different leaders, then we ourselves must be different people.

And until we are we have little room to point fingers at others.