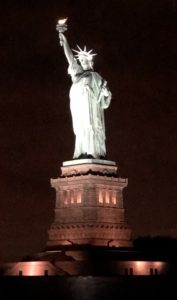 Every year the same things happen.

Every year the city of New York, the greatest city on earth, commemorates her darkest day—09/11/01.

The streets surrounding our studios were literally the hallowed ground at Ground Zero that fateful year. And there is not a day that goes by as I commute through these nearly sacred spaces that I don’t give pause to think about what happened here.

This year was no exception.

Graced by the presence of the families of the victims—most of whom have returned every year since—American news networks look on as we mourn the loss, celebrate the lives, and strengthen the resolve that were all irrevocably changed in this handful of minutes in 2001.

It is THE day where we fulfill our promise to never forget.

And we are faithful in that.

For the last several years a much smaller event has come to pass within more or less the same week of 9/11 every year.

Part of the reason is because of “Captain Fred” and “Francesca” our hosts for the evening that put together all the details aboard the gorgeous ship ATLANTIS.

My morning man—the legendary SNL Sinatra impersonator—Joe Piscopo usually wows with an assortment of American Songbook, Springsteen, The Old Man, and last night a bigger than usual dose of Hendrix.

Then when his show stopping set is completed we make our way to the top of the boat (3 levels high) for an up close view of Lady Liberty.

And as we do there is a calming quiet that comes across the vivacious (at least the rest of the night) crowd.

Everyone stops, looks at her, sometimes mutters things under their breath, sometimes even saying something out loud, about her beauty, her resolve, her enduring symbol.

Last night, all I could think was “She still standing.”

Despite the corrupt politics of New York State and New York City. Despite the constant terror awareness we live under. Despite our seeming inhumanity to our political opposites. Despite the evils in this world that plot otherwise.

Suddenly the gripes I took there with me, the petty grievances, the gross offense of being over looked or turned invisible, the “junk” just seems to melt away.

When evil showed its head, the spirit, meaning, and force of free people, loving their God given liberty, and all that is required to keep it secure responded and sailing up to her one more time reminded me, as long as God tarries—Lady Liberty always will!