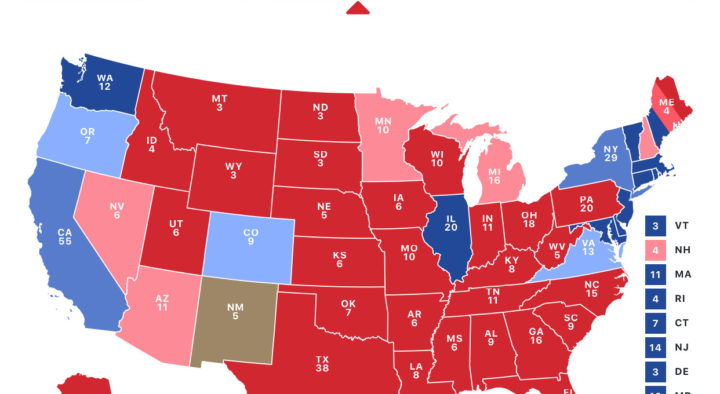 So we see in the second debate a genuine shift begin to happen in these final eleven(ish) days left in this election.

A few I wish to point out.

1. Before the debate… a shift has been underway benefitting President Trump. On social media the viral videos of the enormous crowds that he is drawing and will continue to draw up through 11/3 are inescapable. All of them in battleground states, rally after rally the crowds are surging—exactly as they did in 2016. But aside from that consider this. If Hillary lost the rust belt simply because she didn’t buy five more plane tickets in 2016. If she campaigned so poorly as to barely be able to handle a single campaign event per day. How much worse are voters viewing it as Joe Biden isn’t seen for a full week in the lead up to the debate and the final push. A shift has been occurring…

2. At the debate… Because of the rousty nature of the first debate, because of the “controversy” about which Townhall forum had more viewers, because of the number of breaking news items going into the evening of, voters were rope-a-doped into salivating for the final match-up. What the media (and Democrats but that’s being redundant) were hoping for and in essence promising—was another two fisted brawl. In debate one Trump jumped in too fast, and at times saved Joe Biden, from the things he did NOT save him from last night. Stumbling, bumbling, fatigued Joe made bad statements and because he’s not particularly quick—doubled down on them on the reg. Blatant lies “nobody lost insurance on Obamacare, I had no knowledge of Hunter’s business, I’ve never promised to ban fracking” were important enough for constituents on both sides of each of those issues to question his veracity. But it was the pledging to do away with 11 million jobs and the oil industry all together that got people’s attention in Pennsylvania, Texas, and other energy rich states. Couple that implosion with his inability to lay a glove on Trump on the “emotive” issues of CoVid19, race, criminal justice reform, and foreign policy and it was a doubly bad night. Add to that Trump’s unquestioned knock out moments “Who built the cages Joe,” and you see a trifecta in Trump’s favor.

3. After the debate…I’m one of those who question whether debates do much… most years. But the truncated campaign cycle coupled with the lack of daily access to both candidates has prevented the voters from seeing the two side by side. Hence this debate—maybe more than most—is so vital. After the ridiculously low expectations of the first debate’s outcome Trump looked polished, in command, and knowledgeable without ever having to consult notes. Biden—after four days of prep didn’t appear half as prepared and because the interruptions did not save him this time he led himself out to pasture repeatedly.

As of now nearly 47 million of the ultimate 160,000,000 ballots to be cast have been. A tad more than a 4th. Democrats see this as their advantage but they probably shouldn’t. Traditional GOP areas are seeing as great if not greater spikes than anything happening in Democrat districts.

Also realize this: 10-12% of self identified Democrats are voting for Trump. Meanwhile he’s holding a lock on 97% of his base. And due to Republican efforts in places like North Carolina, Republicans have added upwards of 600,000 new voters—400,000 of them previously unaffiliated. Meanwhile Democrats have added only 93,000.

The race was already tightening, everything that has happened since Trump’s CoVid19 bout has trended in his favor, the debate did nothing to change that and he has more new voters ready to support him than any President of the modern era!
Comment via FacebookComment via Disqus
Arrogance is not equal to Abortion…
Monday Morning thoughts…